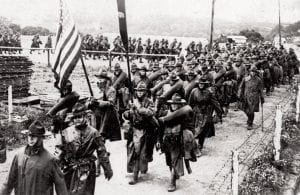 WORLD WAR I AND THE SIGNIFICANCE OF ARMISTICE DAY

Phoenix Veterans Day Parade commemorates the 100th anniversary of the Armistice signing and honors the memory of those who fought in World War I.

Known as the “war to end all wars,” World War I or the Great War was one of the deadliest conflicts in history, with an estimated 9 million soldiers and 7 million civilians dying as a direct result of the fighting. The global war – originating in Europe lasted from July 28, 1914, to November 11, 1918 – was known for its use of trench warfare on the Western Front, which saw both sides constructing elaborate trench and dugout systems opposing each other, protected from assault by barbed wire, mines and other obstacles.

When the war broke out, the United States pursued a policy of non-intervention in the hopes of avoiding conflict and instead brokering a peace agreement. Tensions escalated, however, when a German U-boat sank the British liner RMS Lusitania in May 1915 and 128 Americans were among the dead, President Woodrow Wilson demanded an end to attacks on passenger ships, and German complied. But when seven U.S. merchant ships were sunk by German submarines two years later, that was the last straw. On April 6, 1917, America declared war on Germany, and U.S. soldiers fought alongside the Allies. U.S. infantrymen were nicknamed “Doughboys” – a term that originated in the Mexican-American War, with a number of widely varying theories as to its meaning.

By the end of September 1918, it was clear the military situation facing Germany was an impending loss to the war, a hurried and desperate process ensued to negotiate an armistice. On November 6, a German delegation departed for France, and on November 9, Kaiser Wilhelm II abdicated. The night of November 7, the German delegation crossed the front line in five cars and was escorted for 10 hours across the devastated war zone of Northern France, arriving the next morning, when they were taken to a secret destination aboard Supreme Allied Commander Ferdinand Foch’s private train, parked in a railway siding in a forest.

The Germans were handed a list of Allied demands – which amounted to complete German demilitarization – and were given 72 hours to agree. At 5 a.m. on November 11, the Armistice was agreed upon, to come into effect at 11 a.m. Paris time: “the eleventh hour of the eleventh day of the eleventh month.”

Celebrations erupted across the globe when news of the Armistice reached the home front, with thousands thronging the streets of cities across America. One Massachusetts resident described the scene in Boston: “There was a lot of excitement when we heard about the Armistice … some of them old fellas was walkin’ on the streets with open Bibles in their hands. All the shops were shut down. I never seen the people so crazy … confetti was a-flying in all directions. I’ll never forget it.”

President Wilson proclaimed the first Armistice Day the following year, on November 11, 1919. Between the world wars, November 11 was commemorated as Armistice Day in the United States, Great Britain and France. After World War II, the holiday was recognized as a day of tribute to veterans of both wars. Beginning in 1954, the United States designated November 11 as Veterans Day, to honor veterans of all U.S. wars. British Commonwealth countries now call the holiday Remembrance Day.

The 2018 Phoenix Veterans Day Parade commemorates the 100th anniversary of the signing of that important Armistice and honors the memory of all those who fought in World War I.  It also pays tribute to our veterans for their sacrifice and service to our country in the conflicts that continue to this day.