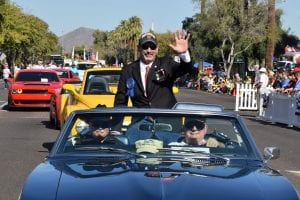 Phoenix, AZ – The Phoenix Veterans Day Parade is marching on in 2021! Due to the pandemic, the Parade became an online celebration in 2020. This year, parade organizers plan to return to the streets. One of the highlights of this special event is the selection of the Veteran’s Grand Marshals. Honoring America’s Veterans (HAV) now seeks nominations for candidates for the 2021 “Honor Our Heroes” competition.

“We are moving ahead with plans for an in-person parade in 2021, and we look forward to seeing all the beautiful floats and marching exhibits once again,” said Paula Pedene, Executive Director of HAV. “The ‘Honor Our Heroes’ campaign helps us select the seven Veteran Grand Marshals. It plays an important role at the Parade. We are looking for nominations of men and women who exude the characteristics of honor, respect, and service” to fill this part.”

Past parades have seen more than 45,000 people who line the streets to honor the service of America’s veterans. The “Honor Our Heroes” honorees selectees go on to serve as Grand Marshals for the Parade. They receive recognition for their service and heroism at the Parade and in the parade program.

Nominations are due by May 16. Nomination guidelines are available online at honoringamericasveterans.org.

In 2021, HAV marks the 25th Anniversary of the Phoenix Veterans Day Parade.  We hope you will join us as we celebrate our anniversary with our veterans on November 11 at 11 a.m. in Phoenix.

Media, please note:  We can garner interviews with any of our past Grand Marshals to share how this event changed their lives.  There are also images of previous Phoenix Veterans Day Parades for your use online at https://havparade.smugmug.com/.  Please credit  Honoring America’s Veterans.