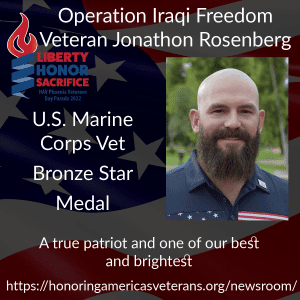 Jonathon
Rosenberg, 22-year Marine Corps Veteran is a 4-time decorated Marine, having
received recognition for valor in combat, including the Bronze Star Medal with
Combat V. Rosenberg participated in intense combat in Fallujah, Iraq, and
Afghanistan.

Rosenberg’s training as a Force Recon Marine and Marine Scout Sniper included some of the most grueling schools in the Department of Defense: Amphibious Reconnaissance School, the Scout Sniper Basic Course, I MEF Urban and Aerial 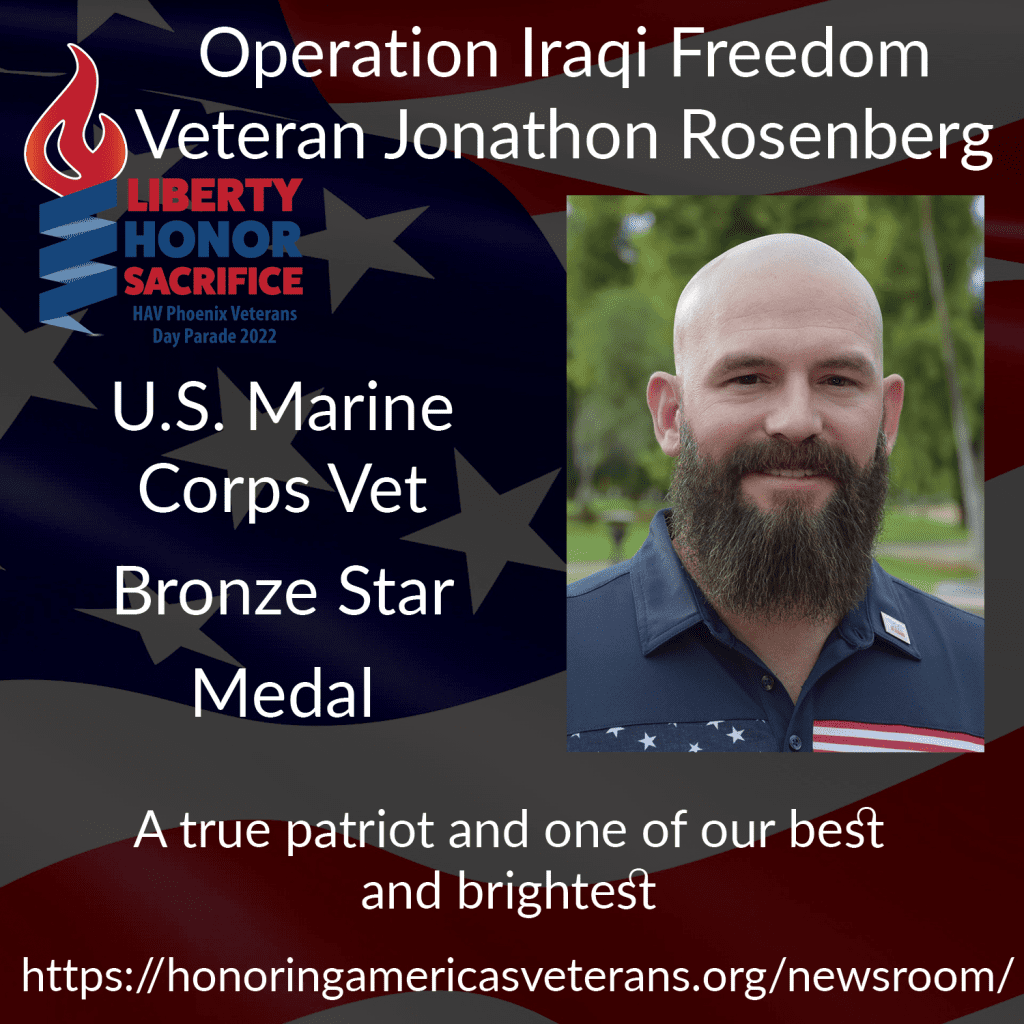 Sniper Course, Military Freefall Jumpmaster Course, and Marine Combatant Dive School. Not only did Rosenberg score as a high shooter in his rigorous Scout Sniper Basic Course, but he also went on to be an instructor in these courses and later served as the Senior Enlisted Advisor at Reconnaissance Training Company. Rosenberg is a role model in the U.S. Marine Corp, the veteran community, and the greater Phoenix community, where he continues to serve. Nominator Marlene Correa describes him as “…a true patriot and one of our best and brightest.” He is the founder and president of the Warriors at Amazon, PHX4 Chapter, named one of Amazon’s most outstanding veteran chapters in 2021. He has also led numerous support efforts in Phoenix including, cemetery clean-ups, charity events, and Amazon’s participation in the 2021 Phoenix Veterans Day Parade. Rosenberg, a graduate of Arizona State University, is happily married to his wife Marlene and lives with their two children, Harlow and Maddox. Rosenberg dedicated years to the U.S. Marine Corps and continues to serve at home every day and we are honored to name him this year’s Operation Iraqi Freedom Veteran Grand Marshal for the 2022 Phoenix Veteran’s Day Parade.

Read about all of the 2022 Grand Marshals here in our continuing blog series. You will also see them serve as grand marshals in the Veterans Day Parade in Phoenix on November 11th at 11 a.m. For more details about the marshals and the parade, go to https://honoringamericasveterans.org/2022-phoenix-veterans-day-parade/.