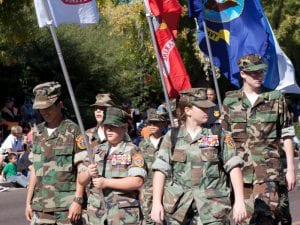 Glowing with tributes to our nation’s true heroes, our veterans, the Phoenix Veterans Day Parade will once again be presented by Honoring America’s Veterans (HAV).

This year’s parade theme is “Honoring America’s Heroes”. The parade has nearly 100 entries, and will also feature:

In addition to Ms. Swit, the parade will also highlight:

MEDIA PLEASE NOTE: Live shot availability will begin at 5 a.m. Several entries will be available throughout the morning, including:

Now in its 23nd year, the parade is one of the premier Veterans Day events in the nation, with tens of thousands of spectators. Several streets will be closed to make way for the Parade.

“The men and women who serve in our military face many unique challenges, and when they return they are a source of pride for us. We can never repay them for their service and sacrifice, so having an event, like this, shows the gratitude we have as a community for them.,” says Brian Ishmael, HAV president.

The University of Phoenix and USAA hold the top spots for sponsorship of this event and have veteran and civilian employees in the parade.

The Stearman Group – World War II bi-planes led by Roger Parrish and Fred Gorrell – followed by Joe Sottile, Kurt Gearhart and Billie Walker, will once again officially start the parade with their flyover.