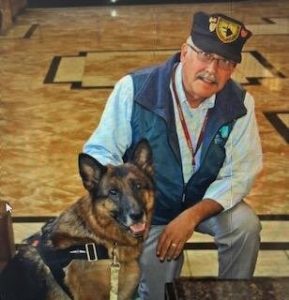 After attending the Phoenix Veterans Day Parade one year, U.S. Army and Vietnam War veteran Jim Frost saw something was missing. There was no parade entry to honor the military working dogs that played a huge part in our history. To change this oversight, he sought the help of dog clubs, law enforcement agencies, and Luke Air Force Base to create a Salute to the War Dog entry. It became one of the most beloved entries each year.

With that win under his belt, Frost turned his sites on, ensuring that the War Dogs would eventually serve as one of the grand marshals in the parade. In 2008, that dream came true when Lex the Military Working Dog became one of the grand marshals. Lex was there when his handler,  Marine Corporal Dustin Jerome Lee, was mortally wounded in a mortar attack in Fallujah, Iraq, in March 2007. Lee was a few weeks shy of his 21st birthday. Both Lee and Lex were injured that day, and Lex stayed at Lee’s side to comfort him. Medics had to drag the 7-year-old German Shepherd Dog away so they could attend to Cpl. Lee, who died a short time later.

But Frost didn’t stop there. He organized a War Dog booth at various canine-related events around the Valley. He raised funds for the National Military Working Dogs Monument to be erected at Lackland AFB in San Antonio, TX. Frost was recognized by the Vietnam Dog Handlers Association and other organizations for his work.

I spoke to Frost a few months ago as he was diligently working on getting the 2023 Sentry Dog Handlers Reunion over Veterans Day weekend so they could be a highlight in the Phoenix Veterans Day parade. He closed his note by saying, ” Thank you so much for organizing this parade for veterans. As I’ve told you several times, it meant a lot to me and chased away many ghosts that used to haunt me.”

Jim Frost died this month from cancer. Because the parade means so much to our veterans, HAV will work towards a Jim Frost dedication to the working dog entry in 2023. If you’d like to help support the parade, you can reach out to the team at Honoring America’s Veterans online at www.honoringamericasveterans.org. While you’re there, you can read this post about Frost and see the link to the news release about his favorite grand marshal, Lex the Military Working Dog.