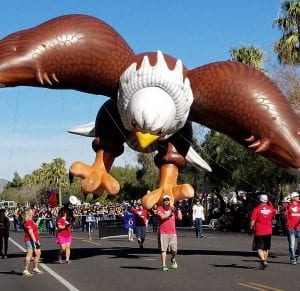 Parade Celebrates 22 Years with Theme “Out of the Trenches: A Century of Remembrance”

Glowing with tributes to our nation’s true heroes, our veterans, the Phoenix Veterans Day Parade will once again be presented by Honoring Arizona’s Veterans (HAV).

Place:  Central and Montebello, south on Central, East on Camelback, and South on 7th Street to Indian School Road

This year’s parade theme is “OUT OF THE TRENCHES: A Century of Remembrance,” marking the 100th anniversary of the signing of the armistice to end World War I. The parade has more than 100 entries, and will also feature:

Celebrity Grand Marshal Loretta Swit: Actress, singer and dancer Loretta Swit will lead this year’s parade. Swit embraces the true compassion of animal advocacy and as such is striving to bring all Military K9 Working Dogs home from overseas. Working with HAV and the Military Working Dog parade entry, Swit will walk the entire route, collecting funds from spectators to help support this effort.  Please bring your dollar bills (or more) to support her in this cause.

In addition to Ms. Swit, the parade will also highlight:

MEDIA PLEASE NOTE:  Live shot availability will begin at 4:30 a.m. Several entries will be available throughout the morning, including:

Now in its 22nd year, the parade is one of the premier Veterans Day events in the nation, with tens of thousands of spectators. Several streets will be closed to make way for the Parade.

“The men and women who serve in our military face many unique challenges, and when they return they are a source of pride for us. We can never repay them for their service and sacrifice, so having an event, like this, shows the gratitude we have as a community for them. That in turn helps us to honor them and that’s why Honoring Arizona’s Veterans puts on this event,” said Aaron Dudney, HAV president.

This year’s Parade Grand Marshals include:

The parade will also feature the three Durant’s essay winners, who will ride in the “Hall of Flame” fire truck:

Each writer shared a different perspective for this year’s theme “OUT OF THE TRENCHES: A Century of Remembrance.”

For the sixth year in a row, Durant’s fine dining restaurant in Phoenix has provided cash awards for the essay contest winners: $500 for first place, $300 for second place and $200 for third place. In addition, the teacher for each of the students will receive $150 to use in his or her classroom.

The University of Phoenix and USAA hold the top spots for sponsorship of this event and have veteran and civilian employees in the parade.

The Stearman Group – World War II bi-planes led by Roger Parrish and Fred Gorrell – followed by Joe Sottile, Kurt Gearhart and Billie Walker, will once again officially start the parade with their flyover.