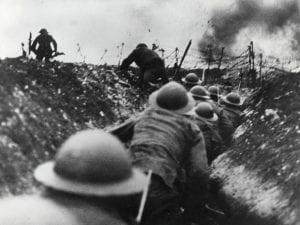 We had nearly 100 entries for our essay contest this year! Writing to the theme of “OUT OF THE TRENCHES: A Century of Remembrance – WWI 1918,” students were judged on Creative Writing, Grammar, Originality, Content, and Theme Focus. The winners will receive cash prizes courtesy of Durant’s Restaurant, a ride in the parade, winning essays printed in the parade program and more. AND each winner’s teacher will receive $150 for use in their classrooms!

Below is our third-place winning essay – be sure to look for all of the winners on the Hall of Flame fire truck in the Parade!

WORLD WAR I: A PORTRAIT OF PATRIOTISM AND PERSEVERANCE

World War I is unique in that it was the first global war and although it may have been a century ago, the foreign policy and dramatic shift in culture still affects us today. The reintroduction of previous military tactics, such as digging trenches for shelter, were merged with new modern technology like machine guns and chemical weapons. The trenches of World War I were dug to protect the soldiers from enemy attack and represented safety in war. When a valiant soldier runs out of the safety and familiarity of the trenches, he is completely vulnerable. When the U.S. entered the war, many different groups ran out of their own metaphorical trenches to unite and support the war effort.

The U.S. was the last to enter World War I because Americans wanted to remain neutral and not engage in European affairs. However, minds quickly changed when German U-boats began attacking civilian ships, such as the RMS Lusitania. On April 6, 1917, the U.S sided with the allies to fight in the Great War. The United States left its own trench of safety, isolationism, and neutrality behind to fight the war to end all wars while also trying to prevent further conflicts by proposing ideas such as the League of Nations. However, the war created a lasting domino effect on the home front. Young American men were required to fight for their country, especially in the brutal underground trenches along the Western European border.

Famous author Ernest Hemingway served in Italy as an ambulance driver for the American Red Cross. Hemingway described the feeling of war from a young man’s perspective, saying, “When you go to war as a boy you have a great illusion of immortality. Other people get killed; not you…. Then when you are badly wounded the first time you lose that illusion and you know it can happen to you.” As young adults, they could never prepare for the atrocities seen both inside the trenches and the in-between battlefield known as no-man’s land.

The young men left the comfort of their home life, their family relationships, and jobs behind and became soldiers sacrificing their lives on foreign soil. The women went from being the caretaker of the house to rolling up their sleeves and dominating the workforce, filling in the vacated jobs left behind from their husbands. The children of World War I left the comforting years of their childhood behind as they were forced to grow up quickly and participate in the war effort on the home front while balancing the emotional trauma of loss. There was a natural sense of patriotism and perseverance seen in every American, especially during the Great War. World War I instigated political and cultural change that, 100 years later, still affects us today. We should continue to honor the brave that came out of their own trenches, making themselves vulnerable to change and leading the United States to victory.