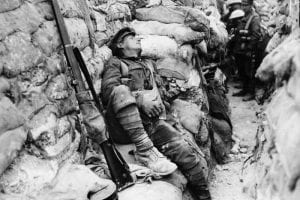 We had nearly 100 entries for our essay contest this year! Writing to the theme of “OUT OF THE TRENCHES: A Century of Remembrance – WWI 1918,” students were judged on Creative Writing, Grammar, Originality, Content, and Theme Focus. The winners will receive cash prizes courtesy of Durant’s Restaurant, a ride in the parade, winning essays printed in the parade program and more. AND each winner’s teacher will receive $150 for use in their classrooms!

Below is our second-place winning essay – be sure to look for all of the winners on the Hall of Flame fire truck in the Parade!

LIFE IN THE TRENCHES: THE IMPACT OF THE AMERICAN SOLDIER

It is November 22, 1916, at 8 o’clock at night. You’re tired. Your brain pounds against your skull, matching the ruthless noise of your comrades screaming orders at each other. You let go of your weapon and fall to your knees, immediately feeling the graininess of the dirt bite at your skin. You close your eyes – not because you’re sleepy, but because you are sick of having to watch the world around you. Sick of listening to your friend scream in agony at the sight of his bloody chest and missing leg. Sick of always being cold and hungry. You listen unwillingly to the sound of bombs and gunfire constantly blaring throughout the lonely nights. The stench of death and fear always manages to creep into you ‒ no matter how much you tell yourself you’re not afraid. No matter how much you remind yourself that you will return home, the doubt still lingers and taunts you at night. You use your calloused hands to wipe the dirt and tears off your sunken face. If the violence of the war doesn’t kill you, the living conditions of the trenches will. You’re snapped out of it by your fellow soldier. He tells you to get your gun and keep shooting. You don’t even know what you’re supposed to be shooting at. You just want to rest, but you know you have to keep going until sunrise. Maybe one day you’ll be happy to see the sun. You’re a 24-year-old man risking everything for his country. This is World War I.

The generation that gripped their men with hesitant affirmation and sent them to a foreign land to defend their nation is now gone. The men who put on their boots to fight for everything they believe in and set the example for the generations to follow have made an undeniable impact on our nation’s history. The century that has followed the event of WWI has been riddled with additional violence and sharp changes in our society. The world as we know it has been shaped and molded by the brave men that served in WWI. The influence of the war created an inspiration that was evident in events such as WWII, Vietnam, and the civil rights movement. The courage and utter boldness demonstrated by those who gave their lives in the trenches quickly became a motivating factor in the fight for change. In the last hundred years, our country has had to face evil in the face and spit in its eyes. Whether it be fighting anti-Semitism on a national scale or racism in their own communities, the bravery needed by these men and women was first clearly demonstrated by our WWI veterans.

As a second-year participant and co-editor for the Cactus Shadows High School chapter for Veterans Heritage Project, I am a firsthand witness of the impact of those who served. I’ve listened to the stories of those who have been on the front lines, those who defended us from thousands of feet in the air, and those who stayed home to provide moral, physical, and financial support. Listening to WWII soldiers whose fathers were WWI sailors, and being able to absorb the first-hand accounts of the struggles they endured and then being able to appreciate the life I have because of them is something that can never be repaid.

What was life like in the trenches of World War I? It was festering in your own filth and not being able to shower for days on end. It was slicing your hands and fingers on the sharp barbed wire surrounding you while you were just trying to complete your duties. It was wishing you were somewhere else, but understanding you had responsibilities and you needed to fulfill them no matter what. It was becoming accustomed to violence and consistent chaos. It was creating the impact of the American soldier.