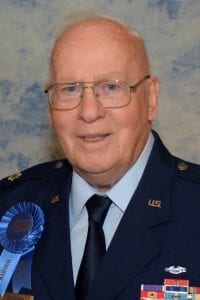 Francis (Frank) Doherty was born May 21, 1928, and grew up in Detroit, Michigan. Doherty enlisted in the U.S. Army at the age of 17 during World War II and was given a non-combat assignment. He returned to Detroit and pursued a degree at the University of Detroit, until he was called back to active duty during the Korean War in 1950. Doherty was attached to Company H, 38th Infantry Regiment, 2nd Infantry Division, in which his mission was a machine gunner.

On May 17, 1951, near Sarong-chi, Korea, Doherty and his division were overrun from the rear of their position. During this battle, he was hit in the face with shrapnel from a grenade. Even though he was injured, Doherty showed his selfless, heroic duty and helped carry a wounded comrade to safety, all while exposing himself to the enemy. Doherty provided cover fire using his machine gun to ensure the rest of the division could get to safety. Once at a safe area, he organized his troops and set a new perimeter. For his actions during this battle, Doherty was given the Bronze Star with the Letter “V” for heroic efforts, the Purple Heart and the Combat Infantry Badge with the 2nd Infantry Division.

After returning from Korea, Doherty used his G.I. Bill to complete his degree at the University of Detroit and was commissioned as an Officer in the U.S. Air Force Reserves in 1954.

When he became a civilian, the lessons he learned while on active duty made him appreciate life and the service members protecting our freedom. Doherty says life is too short to waste time arguing with loved ones over small things.

Doherty married his wife Camille in 1955 and they raised eight children together. Even with eight children, he cared so much about his community that he remained in the Boy Scouts and enjoyed passing down his knowledge to the younger generations.

When asked what Veterans Day means, Doherty said, “It is a great honor to be a veteran because its means we’re alive, and makes me appreciate that people get to enjoy the freedom of speech and religion. It’s nice to see people still have the ability to be free and do what they choose to.”

Doherty feels very honored and flattered to be selected as Korean War Grand Marshal in the Phoenix Veterans Day Parade. He has been selected to take an Honor Flight this year to Washington, D.C., to visit the Korean War Veterans Memorial. In addition to being involved in the Boy Scouts, Doherty is a member of Alpha Kappa Psi fraternity, Reserve Officer Association, American Legion, Veterans of Foreign Wars, Purple Heart Association, as well as a Past Faithful Navigator with the Knights of Columbus.

Doherty returned to Korea in July 2016 for the Military Historical Tour. During that visit, he led a discussion about his experiences during the war and visited the DMZ.

Frank Doherty is a real example of an American hero.

We hope you will join us at the 22nd Annual Phoenix Veterans Day Parade on Monday, November 12, 2017, to see all our Grand Marshals. This year’s parade theme is “OUT OF THE TRENCHES: A Century of Remembrance – WWI 1918.” The parade typically boasts more than 100 entries, and this year will have a special float with nearly 20 Vietnam Veterans riding on it. The parade will also feature patriotic floats, high school marching bands, JROTC marching units, color guards, Veterans Service Organizations, animals, novelty units and much, much more.