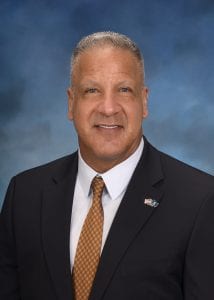 Greg DeBernard was born in Salt Lake City, Utah, where he was adopted by two loving parents, Margaret and Guido. He attended the University of Utah on an ROTC Scholarship and graduated in 1986. He graduated from Southwestern University College of Law in 1989.

He currently serves as the Regional Vice President of the USAA Phoenix Campus. In this role, he is the Senior Officer responsible for shaping and influencing workplace culture to align with USAA’s mission, the USAA Standard, Core Values and the commitment to service philosophy. He is responsible for Phoenix site management, the external community, military and government relations. DeBernard is a practicing attorney and leads the Enterprise Litigation Team at USAA.

In addition to his service for USAA, DeBernard was commissioned into the United States Army in 1986 and served until 2011, eventually retiring from the U.S. Army Reserves. Most of DeBernard’s service was as a member of the California Army National Guard, during which time he held six commands, including a command of an infantry unit, armor unit and the California Officer Candidate School.

DeBernard gained both an appreciation and love for the military during his service. He grew up idolizing his father, who served in World War II as a member of the Army Air Corps. This served as inspiration for him to seek his ROTC scholarship. During his service, he had the honor of serving alongside individuals from all over the country and from other countries. He learned the most important lesson that inspires his commitment to the military, which is the devotion to the person on your left and your right to make it through.

DeBernard is married to Jami and they have two adult children, Aaron and Rachel. He is active in the community through various memberships, including Greater Phoenix Leadership and the Luke AFB Fighter Country Foundation. Greg and Jami DeBernard incorporate a fit and healthy mindset into their daily living and are active pickleball players, among many other activities. The DeBernards also share a passion for leadership and giving. They are both master graduates of Rapport Leadership International and are committed to influencing those around them to give and to reaching their highest potential.

We hope you will join us at the 22nd Annual Phoenix Veterans Day Parade on Monday, November 12, 2017, to see all our Grand Marshals. This year’s parade theme is “OUT OF THE TRENCHES: A Century of Remembrance – WWI 1918.” The parade typically boasts more than 100 entries, and this year will have a special float with nearly 20 Vietnam Veterans riding on it. The parade will also feature patriotic floats, high school marching bands, JROTC marching units, color guards, Veterans Service Organizations, animals, novelty units and much, much more.